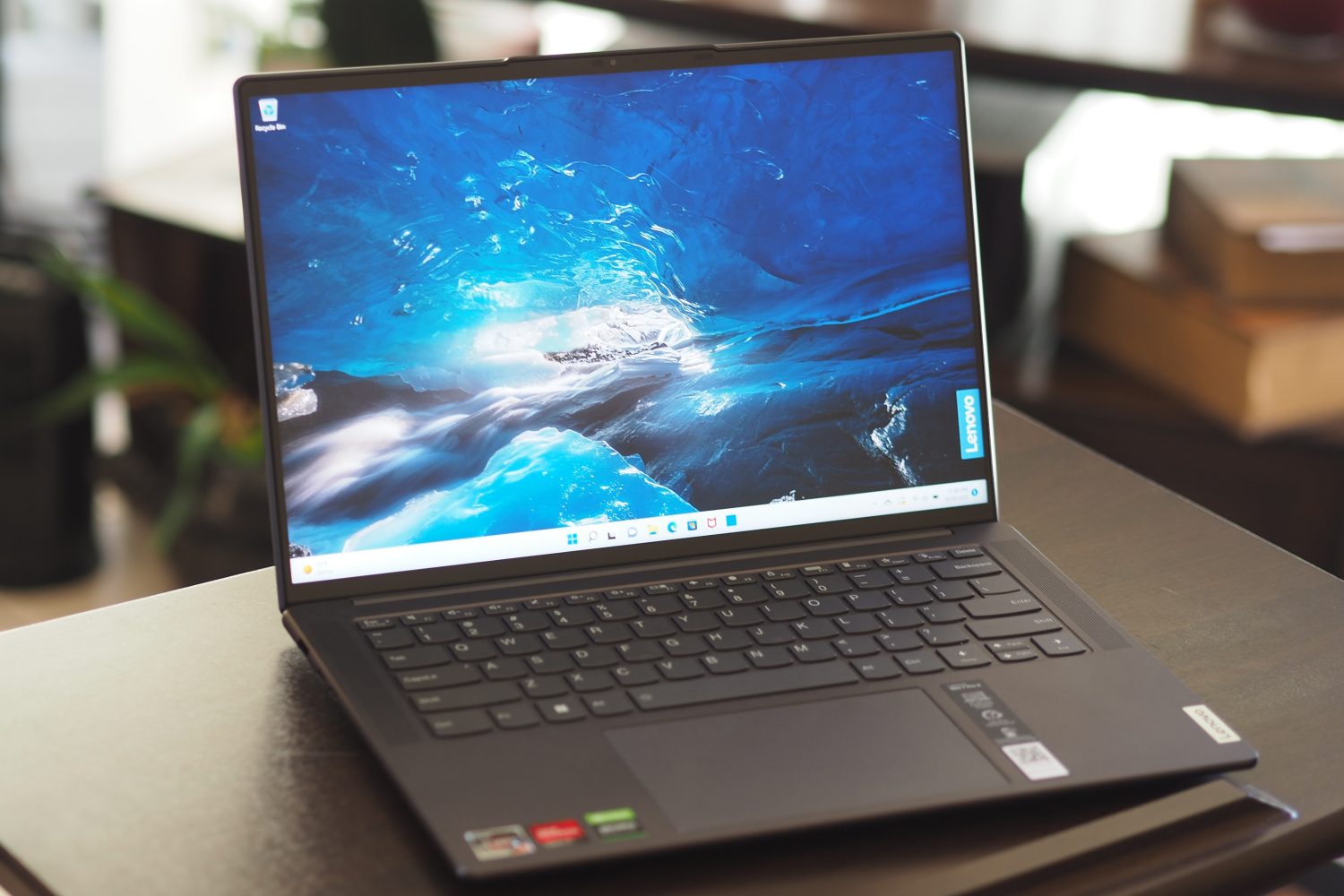 “The Lenovo Slim 7 Pro X leverages a fast AMD CPU and a discrete GPU to provide surprising performance in a thin and light machine.”

A new breed of 14-inch laptops mates thin and light chassis with potent components. We’re talking laptops that are 0.7 inches or slimmer and running 35-watt and 45-watt CPUs and discrete GPUs. Such parts were once reserved for 15-inch and larger machines that are bigger and thicker, providing better airflow to keep things cool.

The performance results with these 14-inch laptops have been decidedly mixed. But that doesn’t stop new machines from being released, including Lenovo’s Slim 7 Pro X that packs in a 35-watt AMD Ryzen 9 6900HS processor and an Nvidia RTX 3050 discrete GPU. That performance combined with the attractive design makes the Slim 7 Pro X another winner in Lenovo’s lineup.

Thin can still be fast and long-lasting

The Slim 7 Pro X is just 0.63 inches thick. That doesn’t leave a lot of room for thermals, although the laptop benefits a bit from its larger 14.5-inch 16:10 display and, therefore, a slightly larger chassis. Some other laptops in the comparison group below also feature fast, full-power CPUs and are a bit thicker. The Acer Swift 3 OLED is one example, with its 45-watt Core i7-12700H and 0.70-inch thickness — not an enormous difference but enough to afford better airflow. The Dell Inspiron 14 Plus is a model with the same Intel CPU that’s as thick as 0.75 inches.

The Slim 7 Pro X is a very strong performer for a laptop of its size.

While the chip didn’t do well in Geekbench 5 in the Slim 7 Pro X, it was faster in our Handbrake test that encodes a 420MB video as H.265 and in Cinebench R23 multi-core. It also did extremely well in the PCMark 10 Complete benchmark that measures a mix of productivity, multimedia, and creativity tasks.

Perhaps most importantly, the Slim 7 Pro X did well in the PugetBench Premiere Pro benchmark that runs in a live version of Adobe Premiere Pro and utilizes both the CPU and GPU, scoring 548 in balanced mode. The benchmark wouldn’t run when I used Lenovo’s utility to switch to performance mode (I’ve reported both results in the other benchmarks), which is a bummer. But its score was slightly behind the Dell Inspiron 14 Plus that hit 569 in balanced mode. Both laptops featured the RTX 3050 GPU, so the difference likely comes down to Intel optimizations that speed up Adobe’s playback performance.

Overall, the Slim 7 Pro X is a strong performer and can handle the most demanding productivity workflows and reasonably heavy creative tasks. That’s impressive for a thin laptop. There was some throttling, as expected, with the CPU heating up to around 95 degrees C and reducing frequencies, but that didn’t significantly impact the Slim 7 Pro X’s overall performance.

Lenovo ships the Slim 7 Pro X with Nvidia’s Studio drivers, which are optimized for fast and reliable performance in applications like Adobe’s Creative Suite and AutoCAD rather than gaming. Even so, the laptop performed well for an RTX 3050. It scored 4,057 in the 3DMark Time Spy test, which jumped to 4,910 in performance mode, and it managed 46 frames per second (fps) in Fortnite at 1200p and epic graphics (58 fps in performance mode). These are solid showings for the GPU and promise competent 1080p gaming at reasonable graphics settings in modern titles.

The thin chassis also tends to limit battery capacity, although Lenovo managed to fit a respectable 70 watt-hours into the Slim 7 Pro X. Thanks to the superior efficiency of the Ryzen 9 CPU compared to Intel 45-watt chips, the Slim 7 Pro X was a leader in battery life among our comparison group in all but our video test. Even then, it was the 28-watt Core i7-1280P that beat it.

It’s not guaranteed that you’ll get a full day’s work out of the Slim 7 Pro X, but you’ll come closer than with many other high-powered 14-inch laptops.

The Slim 7 Pro X isn’t just a thin chassis wrapped around fast components. In fact, even if it weren’t such a fast performer, it would still be a compelling machine (albeit a bit expensive). I’ve mentioned how thin it is, but it’s also light at 3.02 pounds. The Storm Gray aluminum chassis is rigid with no bending, flexing, or twisting, making it nearly equal to the exquisitely designed Lenovo Slim 9i. Its chassis edges are rounded, although not as comprehensively as the Slim 9i’s, while the edges along the display are also rounded. The Slim 7i Pro X is an attractive laptop that’s also unusually comfortable in hand.

Not everything is perfect with the Slim 7 Pro X design. For example, the hinge wasn’t as smooth as some, binding up as the lid was opened to about three-quarters and requiring a second hand to finish the movement. And the fans spun up and were louder than you’ll find on many similar laptops. These are minor nitpicks, though.

The keyboard is spacious with large, sculpted keycaps. I found the mechanism slightly better than the Slim 9i’s, with what felt like deeper travel and a crisper bottoming action. In general, I found it more comfortable than the Slim 9i’s, although still not in the same class as HP’s Spectre or Dell’s XPS keyboards. The touchpad was large, took up most of the palm rest space, and was precise with confident, quiet button clicks. The touch display on my review unit was nice to see.

For such a thin laptop, the Slim 7 Pro X manages to offer solid connectivity. There are two USB-C 3.2 Gen 2 ports (without Thunderbolt 4 support becauseto the AMD chipset), two USB-A 3.2 Gen 1 ports, a full-size HDMI 2.0 port, and a 3.5mm audio jack. Creators will miss an SD card reader, which is a significant omission. Wi-Fi 6 and Bluetooth 5.1 are a step behind, again due to AMD.

I’ve noticed an impressive uptick in display quality across most of the laptops I’ve reviewed over the last year, a trend that I noted at the end of 2021 and that’s only accelerated since then. While technologies like OLED have made a tremendous impact, the traditional IPS display has also seen an across-the-board improvement that’s been impressive to watch unfold. The Slim 7 Pro X offers just one display option at the moment, a 14.5-inch 16:10 3K (3,072 x 1,920) IPS panel running at a brisk 120Hz that makes the Windows 11 user interface a lot more fluid.

The panel’s overall quality was impressive, with plenty of brightness, incredible contrast for an IPS display, and slightly better than average color width. Color accuracy was a little off, but it was still good enough for all but professional creative work.

Suppose you’re a heavy user of videoconferencing tools like Zoom and Skype. In that case, you’ll appreciate the Slim 7 Pro X’s 1080p webcam with an electronic privacy shutter activated by a switch on the right side. The webcam offers a high-resolution image with excellent lowlight support and plenty of detail. The Lenovo lacks some of the more advanced videoconferencing features like automatic centering and such that are offered on some other machines, but the quality is as good as you’ll find.

There’s also an infrared camera that enables Windows 11 Hello passwordless login support, which was fast and reliable in my testing. Lenovo also included its intelligent sensing functionality, including Zero Touch Lock that turns off the display when the user leaves the area and puts the laptop to sleep, and Zero Touch Login that wakes it up and automatically logs in when the user returns. This kind of functionality is becoming more common on premium laptops, and it not only affords better privacy, but it also helps save battery life. As usual, the features worked so well that I had to turn them off to conduct our suite of battery tests.

I’ll also mention some additional convenience features that fall under the “intelligent” label. Special gestures are built into the touchpad, including the ability to adjust display brightness and system volume while scrolling up and down on either side of the touchpad. A set of touchscreen gestures perform similar functions. These are small touches, but they help make the Slim 7 Pro X more usable.

Yet another solid 14-inch alternative

The Lenovo Slim 7 Pro X is an admirable performer with surprisingly good battery life and a solid build. While it’s not quite as refined as the more expensive Lenovo Slim 9i, it’s a thinner high-performance option than laptops like the Dell Inspiron 14 Plus and the Acer Swift 3 OLED. And it has a more inspired design than both of those machines offer.

At the same time, you’re certainly paying a premium price for the Slim 7 Pro X. If you don’t need the extra performance the GPU provides though, you can spend hundreds less and get equally compelling but slower laptops. But as always, it’s great to have so many choices in the world of Windows laptops, and the Slim 7 Pro X fills is a solid addition.